Here is a short summary of Darrel Aronofsky film ‘Noah,’ with all its ‘strange’ elements that 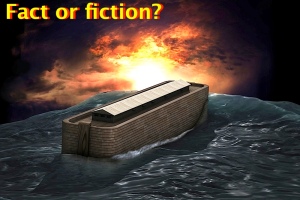 are not in the Biblical account. The film begins where Noah’s father, Lamech, is killed by Tubal-Cain. He loots his corpse for an ancient snake skin which came from Adam.

When Noah has grown up, he sees a flower growing instantly from the ground. Haunted by dreams, he, his wife and three sons travel to visit his grandfather Methuselah. On the way they come across a tribe or people who were slaughtered. A girl, Ila, is wounded but still alive. They rescue her, but she is barren because of the wound.

Noah and his family are pursued by Tubal-Cain’s people, but find refuge with the Watchers. They are fallen angels, who were punished by God, because they helped humans after they were evicted from the Garden of Eden. So they are confined to bodies made of rocky pieces.

Methuselah gives Noah a seed from Eden. When he plants it a forest grows almost instantly. From the wood of those trees they have to construct the ark. The Watchers help with the construction. Eight years later, as the ark nears completion, the birds, snakes and other animals come to Noah and enter the ark. They are put to sleep by an incense that Noah prepared.

When Noah visits other human settlements to find wives for his sons, he notices the depravity and becomes convinced that God wants the human race to end.  Methuselah heals Ila from her barrenness, and she and Seth consummate their love.

Ham decides to find a wife for himself, and meets a captured girl, Na’el. He earns het trust, but on their way to the ark, her foot is caught in a trap. As the men of Tubal-Cain swarm to destroy the ark, Noah rescues only Ham, but leaves Na’el to be trampled to death.

Theey board the ark, except Methuselah who prefers death. The Watchers guard the ark against enemy attacks. They sacrifice themselves to help Noah and his family, are forgiven by the ‘Creator’ and ascend to heaven as angels of light. Tubal-Cain gains entrance and hides in the ark. Ham discovers him and protects him.

Ila and Shem find out that she is pregnant. Noah says if it is a girl, he will have to kill her (in obedience to the ‘Creator’), because the human race must go extinct (to protect nature). Noah asks the ‘Creator’ for advice, but gets none. So he persists in his plan to kill the baby if it is a girl. Shem builds a raft to escape with his wife and baby, but Noah discovers it and burns the raft.

Noah, lured by Ham, is attacked by Tubal-Cain. Ham relents and kills Tubal-Cain. While dying, he gives Ham the snakeskin, and proclaims that he is now a man.

Ila gives birth to twin daughters. Noah is intent on killing them, but cannot bring himself to do it. He concludes that he failed the ‘Creator.’ Ila later tells Noah that the ‘Creator’ left humanity’s fate in his (Noah’s) hands.

This, in short is the Aronofsky version of the Biblical account of Noah and the world-wide flood. In this whole story the only Biblical facts seemed to be the names and the deluge. Everything else is fiction. Please go and see the film, and be encouraged that the devil goes to so much trouble to malign the Bible. It is because the Bible is about reality, not religion.