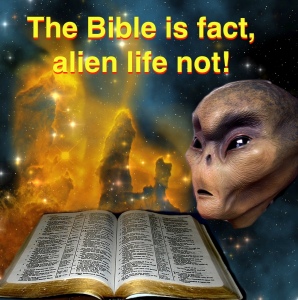 Kepler-452b has been hailed as the earth’s twin planet.

As can be expected the world is very excited, because alien life might exist there. People speculate how Christians will respond to the news of life on this ‘twin’ of earth. 2  There is an interesting narrative in 1 Kings in the Old Testament that demonstrates how we should regard such challenges to the Bible.

Ben-Hadad, king of the Arameans, besieged Jerusalem and sent a message to King Ahab of Israel. He would come and take his silver and gold, wives and children, and that his officers will search the palace and houses of his officials and take everything of value. Ahab’s answer is classic: “Tell him: ‘One who puts on his armour should not boast like one who takes it off.’” 3

Ahab meant: don’t glory in something until you have won the battle. For Christians it means: bring conclusive proof of life on Kepler-452b, not mere speculations. A subject like astro-biology (the study of life on other planets) has no evidence for what it teaches. It is all about ‘maybe, some day….’ If there was  any convincing proofs of life on other planets, we would never hear the end of it. The folly of the Bible will be loudly trumpeted.

In the mean time the following aspects can be considered: