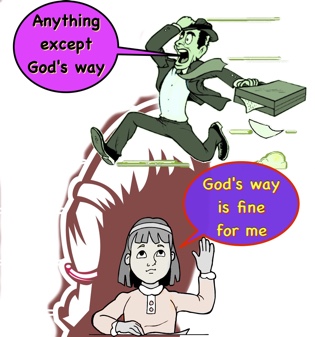 In the blogs Why is hell so horrific? and God’s Paradise, we saw that God planned two eternal destinations, heaven and hell.  Despite God’s brilliant design of a glorious beautiful planet for man and a lake of fire for the rebellious angels, it is very clear that not all people will be with God on the new heavens and earth as the Bride of Christ.  The last book of the Bible states it clearly, ‘If anyone’s name was not found written in the book of life, he was thrown into the lake of fire.’ 1   What happened?

Some angels sided with God and some followed Lucifer (the devil or Satan) when he wanted to usurp God’s throne and was thrown out of heaven.  People have the same free will to chose to side with God, or to reject Him.  For example, the first son of Adam and Eve, Cain, joined the ranks of the devil, ‘Do not be like Cain, who belonged to the evil one, and murdered his brother.’ 2  God limited Himself (and the devil and his fallen angels) not to interfere with a person’s free will.

God is omniscient, He knew that people would rebel and disobey Him, just like the angels.  So before creation, God planned that this life will be a testing ground where people are sifted.  If someone decides to reject salvation (Jesus came to save man from the devil’s works 3), He will not interfere.  God will never force people to love Him (if He forces one, He has to force them all).

#  People are not powerless to resist the devil.

The devil was sentenced to the eternal lake of fire and he cannot change it.  So he tries to spite God and keep people away from His saving grace.  Yet the same free will that allows people to choose to reject God, enables them to resist the devil. 4

#  God’s hands are ‘chained’ when a person does not want to be helped.

God provided a way of escape from the decree of ‘the wages of sin is death.’  5  Jesus paid the penalty.  Some people are rebels who refuse God’s ‘escape clause.’   They tell Him straight in His face that Jesus’ sacrifice means nothing to them.  They are quite happy to pay the wages of their sin themselves.

At the final judgement God divides all people.  Those who loved God will be with Him, and those who rejected and resisted His grace and mercy, will never see His face.