Guy Harrison asks the question: ‘Why don’t they read their Book?’ 1  He explains that the Bible is the 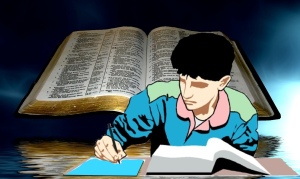 most important book of all time for Christians, but very few of them take the time to read it from cover to cover.

We cannot deny that he is right.

To conclude. We cannot deny Guy’s claim that Christians generally don’t read the Bible. Yet we live in a time that it is becoming very important to know the Bible. It is not only to retain our own faith, but also to help our children, who will eventually venture outside the protective environment of their homes. They need to, ‘Be self-controlled and alert. [Their] enemy the devil prowls around like a roaring lion looking for someone to devour.’ 2 Unfortunately, many are slain. We need to answer the questions, so that the youth know the answers.

The next blog is: How to read the Book.