We are easily inspired by the success stories of people who achieved fame, money, houses, cars,

the most exciting spouses and wonderful kids through positive thinking, goal setting and hard work. My problem was that I am an average kind of guy. Would it work for me? The only person I know who has no favourites is God. So I consulted the Bible to find out if those things ring true with Him.

Let me reframe my question: what does a positive, overcoming lifestyle have to do with the Kingdom of God? Does God want it for me, or was it only for people who don’t believe in Jesus, are happy to make a success here, and don’t worry about life after death? Another issue that bothered me was that it seemed as if God planned hard times for us. Otherwise, why would Paul write, ‘We must go through many hardships to enter the Kingdom of God?’ 1 That hardly sounded like a life of achievement to me.

In a sense I had conditioned myself to see Christians as the world sees us: dreary people who are ready to suffer and forgo life’s pleasures. Was I right? I had to find out what the Bible, my foundation, says. When something is according to God’s will, I am convinced. What did I find?

# 1. Joseph. He had a dream from God that he would be a ruler. The dream must have sustained him during those years of slavery and imprisonment. Did the dream come out? Yes! And I’m sure he enjoyed the benefits that came with the responsibilities.

# 2. Psalm 1. Reading the very first psalm in the Bible convinced me that God does plan good things for us, ‘…his [the believer’s] delight is in the law of the Lord, and on His law he meditates day and night. He is like a tree planted by streams of water, which yields it fruit in season and whose leaf does not wither. Whatever he does prospers.’  For example, despite Joseph’s trials he came out with flying colours. The principle of achievement seems Biblical.

# 3. The Ten Minas. A parable that made an impression on me was the one of the Ten Minas. 2  The King [Jesus] went away [to the Father] to receive the kingship. He gave ten of his servants a mina each and told them to use them to the best advantage until he came back. When the king returned, he handsomely rewarded the diligent workers. One was given charge of ten cities and another of five cities. One who refused to use his God given talent was reproved. From this I understood that God has given each of His children special talents, and He expects us to develop them. I realised I could achieve more by following the advice of the Bible, and people like Zig Ziglar and Caroline Leaf make it practical. A positive attitude has a better chance to achieve success than a spirit of defeat.

I was convinced that God wants me to develop the talents He gave me. Just like Joseph there will be trials (to develop perseverance), but look at the outcome. Look at Jesus, Abraham, David, Paul and others who steadfastly kept their eyes on God, and achieved God’s purpose for their lives. If I can fix my eyes on Jesus, why can’t I succeed? So, with God’s help, I intend to justify God’s faith in me when he called me (as He calls all Christians). I cannot let Him down.

If ever there was a patient man who developed faith, it was Abraham. God gave him a promise that he would 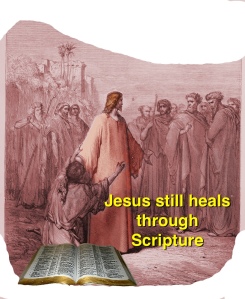 become the father of many nations.1 How long did Abraham wait for the son born to him and Sarah? It was about 25 years.

We read in Romans 4:18-20,  Against all hope, Abraham in hope believed and so became the father of many nations, just as it had been said to him, ‘So shall your offspring be.'”  The problem was that the man was old, but ‘without weakening in his faith, he faced the fact that his body was as good as dead—since he was about a hundred years old—and that Sarah’s womb was also dead.’

‘Yet he did not waver through unbelief regarding the promise of God, but was strengthened in his faith and gave glory to God, being fully persuaded that God had the power to do what He had promised.’

What Abraham displayed was the renewing of his mind (God promised him offspring), and then his body was renewed.

What does this have to do with me? Just this: at the age of 69 a doctor warned me that I will need a knee replacement within three years. Without a medical aid scheme, the news did not go down well. I felt a bit down, but by God’s providence, someone told me about Dr Caroline Leaf. She specialises in the renewing of the mind and brings brain science and the Bible together.

This was one of the highlights of the year for me. Suddenly I had hope. I understood that Jesus still heals. He said to two blind people when He opened their eyes,  According to your faith will it be done to you.’ 2

If the mind controls the body, why should I not believe that I will be healed? But that is not the end of the story. I also started watching and listening to Zig Ziglar. Previously I thought he had a ‘prosperity message’ and I wasn’t interested. But I was wrong. Under their influence of those two people, I repented of my ‘toxic’ thoughts. Zig also gave me the hope, that despite my age, something good can still come from my life.

That is why I (and my wife) are currently in this ‘mind gym.’  It is exciting, because God doesn’t only care about the ‘spiritual,’ but also about the physical. And He gave good advice all along, (which I seemed to miss) like, ‘My son, pay close attention to what I say, listen closely to my words. Do not let them out of your sight, keep them within your heart; for they are life to those who find them, and health to a man’s whole body.’ 3

How encouraging! God doesn’t only provide for the future, but also for the present. That is why I am personally so happy with the Gospel of Jesus Christ. He gives hope, He helps, He encourages and He gives us eternal life as a bonus. What a wonderful Father we have!