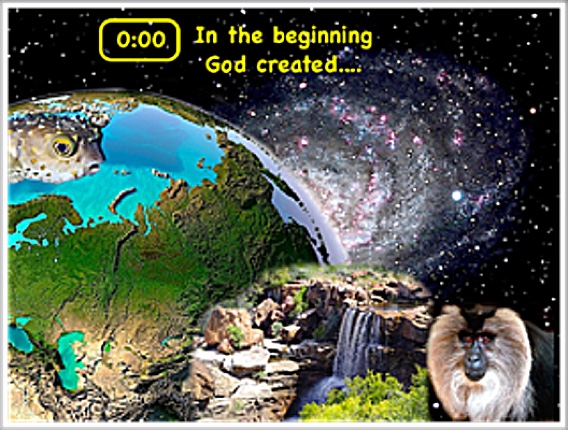 The first verse in the Bible is a short and powerful sentence:

‘In the beginning God [Elohim, the plural form of God] created the heavens and the earth.’  Genesis 1:1

Scripture is the link between the invisible and the visible, between the supernatural and the natural.  This first verse explains it: an invisible powerful God created the heavens and the earth.  We know about it because we have the truthful Word of God.  This means that the Holy Bible, the Word of God, is man’s precious revelation from an Extraterrestrial God about Him and why He created the universe.

What do we deduct from this very first verse?

(Do not forget that we are privileged to have the rest of the Bible’s 66 books to fill in the gaps of the short creation account.)

We know from history that this verse has generated the most heat ever in families, societies, countries, and the world at large.  Why?  Its claims sound a bit like science fiction.  Could there be a real God who created the universe in six 24-hour days?  All of it?  No wonder it is often regarded as ‘myth.’

God is not alone in the creation business.

Actually, He was not alone all along since He is eternal.  He was never created.  As said, the word for God in Genesis 1:1 is plural.  We meet the Holy Spirit in verse 2, ‘…and the Holy Spirit was hovering over the waters.’  In addition the New Testament gives more information about the third person involved in the creation: Jesus. 1

Before that, there was no time.  It is logical, since the sun and moon function as time keepers.  Also, there was besides the Trinity, nothing else.  No space, no matter.  Hebrews 11:3 tells us, ‘By faith we understand that the universe was formed at God’s command, so that what is seen was not made out of what was visible.’

This first verse in Genesis that introduces God’s creative abilities, is proof that the Holy Spirit inspired Scripture.  Moses (regarded as the writer of the Pentateuch) grew up in Pharaoh’s court in Egypt.  The Israelite slaves spent many years building store cities, pyramids, monuments, et cetera.  Moses understood very well that construction takes time.  So creation of the physical universe in six days does sound a bit far fetched.  Yet he wrote inspired by the Holy Spirit.

The first creation prepares us for another creation.

‘Behold, I will create a new heavens and a new earth.  The former things will not be remembered, nor will they come to mind.’ 2   This first creation is just a prototype.  The real thing is coming.  It will be preceded by a massive fire such as the world has never seen.  It will destroy every element of the natural universe, ‘…The heavens will disappear with a roar; the elements will be destroyed by fire, and the earth and everything in it will be laid bare….  That day will bring about the destruction of the heavens by fire, and the elements will melt in the heat.’ 3   Then God will create the ‘final’ one.  The new heavens and earth will be supernatural and eternal.  Therefore there will be no need for the elements that make up our present natural universe.  The coming miracles are a ‘fact.’  We don’t need to doubt it.

It is important to know that Genesis 1:1 is true.  Scripture hangs on it, God’s reputation rests on it, and the hope of billions of Jesus’ followers are based on it.

To answer it, we rely on Scripture.

It tells us that God, Jesus and the Holy Spirit existed eternally.

We know that everything that was created has to have a cause.

God is uncreated, so He has no cause, nobody created Him.

The universe came into existence, so it has a cause.  The cause is God.

The days of creation in Genesis 1 is a contentious issue. 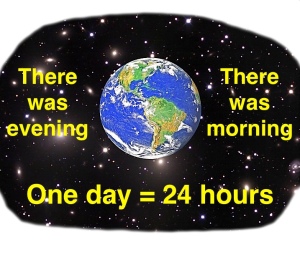 The question is whether the Bible is correct that God created in six twenty-four hour days?

Why does intense hostility often accompany a discussion of the length of the creation days? It is because it is an authority issue. If God did not create supernaturally in six days, it is obvious that He has no authority. The only alternative is evolution over millions of years, but that has nothing to do with God’s omnipotence. It is supposed to be just a natural event.

Nobody has authority over something he or she did not create. Why would it not be true for God?

If life evolved randomly and naturally by chance, what rights has God to rule in a creation that is not His own? Yet in chapter 2 of Genesis, we already see that God takes the lead and puts Adam in the Garden of Eden. God gives him a command (don’t eat from a certain tree).  In the rest of the Bible the pattern remains. God is in command and He says what must or should be done, and what will happen in future.

The fact that God is in command, tells us that He earned that right because He created everything. That implies ownership. Yet people (who call themselves ‘Christians’) regardlessly persist that all of nature evolved. They don’t realise that if anyone can change one part of the Bible, why not other parts like the virgin birth, miracles and the resurrection? In the end there is only one person who benefits from this squabble over the creation days. It is the arch enemy of God, the devil.

What does the devil gain by fomenting unrest over the issue? He knows how people’s thoughts function: doubt a little… doubt a bit more… and more… and eventually nothing remains. What emerges out of the ashes of doubt about the length of the creation days in the Bible, is a brand new unbeliever straight on his way to the same destiny as the devil. The devil loves it. He relishes it. That is why he causes people to doubt Scripture.

Conclusion: The next time you hear people argue about the length of creation days, remember:

Then the Bible fails the test and can be dumped into the rubbish bin. The devil will love it. As a loser, he will be dumped one day, but it is unfortunate that all people who believed his lies about Scripture will join him. Don’t let the devil triumph. Jesus our Lord is the Victor for ever.