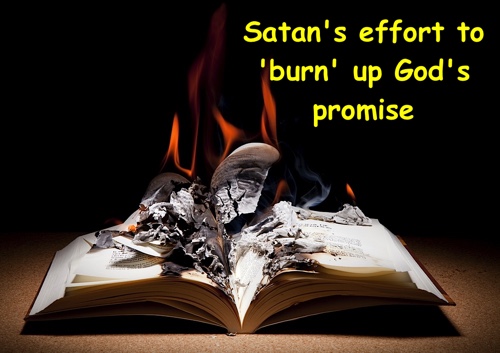 Part 2, One of Satan’s revenge strategies

As Satan wanted to be like God, he also needed a kingdom.  When he rebelled against God, he got a following among the angels.  They are the demons, his workers.

Then he also wanted a following among the people.  His opportunity came in the Garden of Eden.  He convinced Adam and Eve to disobey God.  He trapped humanity.  It suited Satan very well.

There was just one tiny problem for Satan and that was God’s promise,

As head of a new kingdom in rebellion against God, it did not go down well.  He had to deal with it.  It could not be that difficult to outsmart God!

The promised Redeemer would be born of a woman.

God said the ‘seed of a woman.’  Which woman would it be?  The devil did not know, so he decided on a strategy to counter God’s promise.  Satan knew people were different from angels.  Yet, with his abilities he could send his angels to take the form of men and marry women.  Then he could pollute the human bloodline.

He planned that his demons marry women and produce ‘mixed’ blood offspring.  Satan did just that.  His angels (demons), had to leave their assigned place in heaven and cohabit with humans,

‘When men began to increase in number on the earth and daughters were born to them, the sons of God saw that the daughters of men were beautiful, and they married any of them they chose.’  Genesis 6:1-2

As if God did not know about it.  When the fallen angels, demons, intermarried with women, the generation became extremely wicked.  God decided to destroy the whole generation.  That was the only way to make sure no ‘mixed’ blood offspring would be left.

One family kept themselves separate.

They were Noah, his wife and three sons with their wives.  God told Noah to build an ark.  He did it and he and his family were saved.  The rest all perished in the worldwide flood.

In case some people argue that God is very cruel, may we point out the following:

God did send the flood and the whole wicked generation perished.  Only Noah and his family were saved through the ark.

God considered it a grievous sin that those angels transgressed their creation place.

Many of us were taught that the sons of God referred to the ‘godly’ line of Seth, and the daughters of man to the ‘ungodly’ line of Cain.  Yet the ‘daughters of man’ would be both Sethites and Cainites.   In many other places in the Bible angels are called ‘sons of God (always male).’  Reference: J D Sarfati, The Genesis Account,Creation Book Publishers, 2015, p 474-480