Is mother earth wearing out like a garment?  Nobody likes it, but apparently nature is running down. 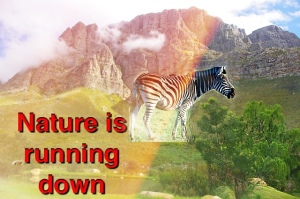 The world’s wildlife population decreased by 52% since 1971. Logically it was mainly caused by humans. 1,2

What do we need to do to save our planet? The advice is to consume less, farm more efficiently, use water in a smarter way, reduce our footprint. Will it help? Not according to R A Svenson, in his book, Hurtling Towards Oblivion.3  Not according to the Bible, because the earth will run down until God intervenes to renew all things.

The Bible is an ancient book by our standards. Yet what Mail & Guardian or CNN says concerning the earth and its health, is old hat to God. At least 2,500 years ago the Holy Spirit inspired Isaiah and the writer of Psalm 102, to foretell that the earth has a limited life span.

In Genesis 3:14-19 God pronounced a general curse on creation. Basically it is that everything will run down. The logic is explained, ‘Behold I will create new heavens and a new earth. The former things will not be remembered.’ 4 Why would God create new heavens and a new earth if the old one is still good? The curse tells us that the universe and the earth is running down, ‘In the beginning you laid the foundations of the earth, and the heavens are the work of your hands. They will perish, but you remain; they will all wear out like a garment.’ 5

That does not mean that people can wilfully destroy nature. Revelation 11:18 warns, ‘The time has come for judging the dead, and for rewarding your servants the prophets and your saints and those who reverence your name, both small and great – and for destroying those who destroy the earth.’  God will call people to account who wilfully destroyed His creation, even if it is running down because of the curse.

Many people have been so convinced by the words of atheists, skeptics, liberal theologians and theistic Christians (whatever that means), they cannot imagine that the Bible is about real life. Yet the running down of nature and the earth makes one realise how precise Scripture is. It makes one realise that God’s clock is ticking and the time of Christ’s return is approaching.