One of the blogs on Ex-Christian.net had the following comment, ‘Your children now have a large family and 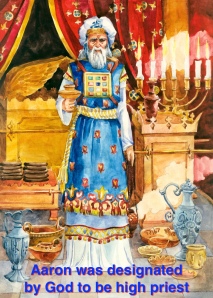 many of them disagree with you and refuse to live by your rules. You get angry and dig a series of large pits and throw many of these children into the pits and bury them alive.’  It then asks, ‘Does this make sense to you? It makes sense to Christians!’ 1

The example is probably the incident of Korah, Dathan and Abiram when they challenged God in Numbers 16. The Biblical facts are as follows: the high priesthood was entrusted to Aaron. Korah was part of the Levitical family who had to support Aaron and his sons in the priestly duties.2  Korah, supported by Dathan, Abiram (and 250 others) complained about Aaron’s position as the high priest, ’You have gone too far! The whole community is holy, every one of them, and the Lord is with them. Why do you set yourselves above the Lord’s assembly?’ 3  It was God who prescribed the duties of the different families. So their rebellion was really directed against God.

When Moses summoned Dathan and Abiram to hear from God about the issue, they said, ‘We will not come. Isn’t it enough that you have brought us up out of a land flowing with milk and honey to kill us in the desert? And now you also want to lord it over us? Moreover, you haven’t brought us into a land flowing with milk and honey or given us an inheritance of fields and vineyards. Will you gouge out the eyes of these men [make slaves of them]? No, we will not come.’ 4

It was not Moses who rescued the Israelites from Egyptian slavery, but God. Yet the fear and disobedience of the Israelites (which included Korah and company) to conquer the Canaanites with the help of God, prevented them from taking in the promised land of milk and honey. Therefore they implied that it was God who did not keep His promise. Their open rebellion against God caused them to be buried in a supernatural earthquake.

Neal Stone claims that his version makes sense to Christians. We disagree: his account does not make sense at all, but the real facts from Scripture do make sense. His report demonstrates the lengths people will go to, to ‘justify’ their apostasy.

The question is, can someone who doesn’t know the context of this history, recognise the mangled version presented by this ex Christian? It is not likely. Yet that is the kind of stuff that persuades people to reject God. In the process they trade in their hope of eternal life for total annihilation like Korah and his followers. The latter missed the promised land, which typifies eternal life with God.

6 thoughts on “Ex-Christian.net and Bible Bashing”