We are all well aware of wars. Some grim details continually fill our TV sets and cinemas. 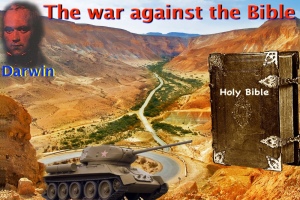 There are many historical accounts of the two great wars, World War 1 and World War 2. We have had the Vietnam and Korean wars, and many others.

Today the Western world is regarded as modern and sophisticated. Yet, we live in the midst of the biggest war of all times. It is comprehensive, and its outcome is more deadly than physical wars. This war is about peoples’s eternal destination. Eternal means just that, eternal, it never stops. Life after death is eternal.

If anybody thinks evolution teaches that there is no life after death, they are mistaken. Evolution has no contemporary value, except to make people think that atheism is an intellectual decision. If evolution had been some harmless idea, why do you think they put so much emphasis on ‘protecting’ it from criticism in schools and universities? Why is there such hatred against the Bible and God? Why are so many lies found in evolutionary material? Just for the sake of science? We want to say, ‘Wake up, baby, to the real world.‘  It is not about science, but about souls.

Why is his battle against the Bible? The devil opposes God, and does everything he can to deceive people. Evolution is known as one of the most successful weapons of war against God. He strikes at the most strategic point in his enemy’s defences. He knows that the Bible stands or falls with creation. Thus his media campaign is especially directed towards Genesis 1. Nullify Genesis 1, and the Bible becomes nothing. No Creator God, therefore no judgement, no sin, no Saviour.

The war on the Bible has many different ‘battalions.’  For example, the age of the earth, and all life evolved over millions and billions of years, are part of the plan to oppose the Bible. The motto is, if anything is against the Bible, it is good and must be used. Attack on all sides, give nothing, demand ever more admissions that the Bible is just a human book, incessantly repeat that evolution is science (it is not).

The Roman emperors tried to destroy the faith by burning Bibles and killing Christians. The Communists in Russia and China followed suit. They all failed. Today the persecution is through evolution. Since the Bible is indestructible, this attempt will also fail.

The war against the Bible tells us: we are dealing with a book of Truth that has to do with real life; the opposition against God is not some story or fiction; we still have to choose what to believe.